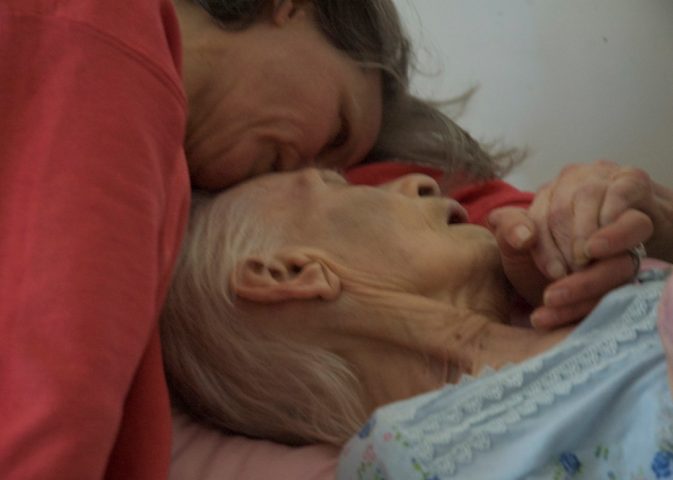 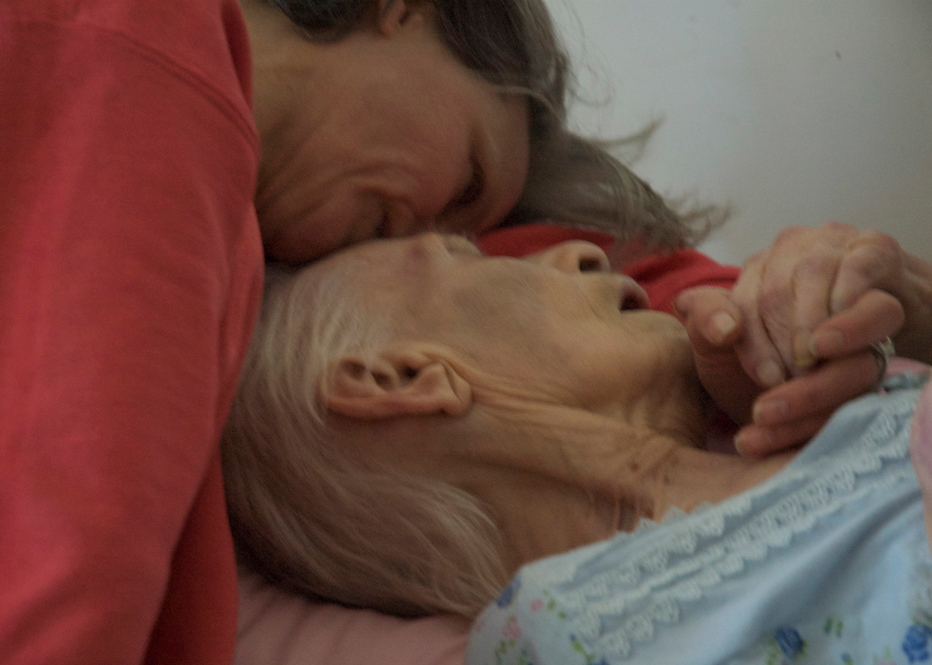 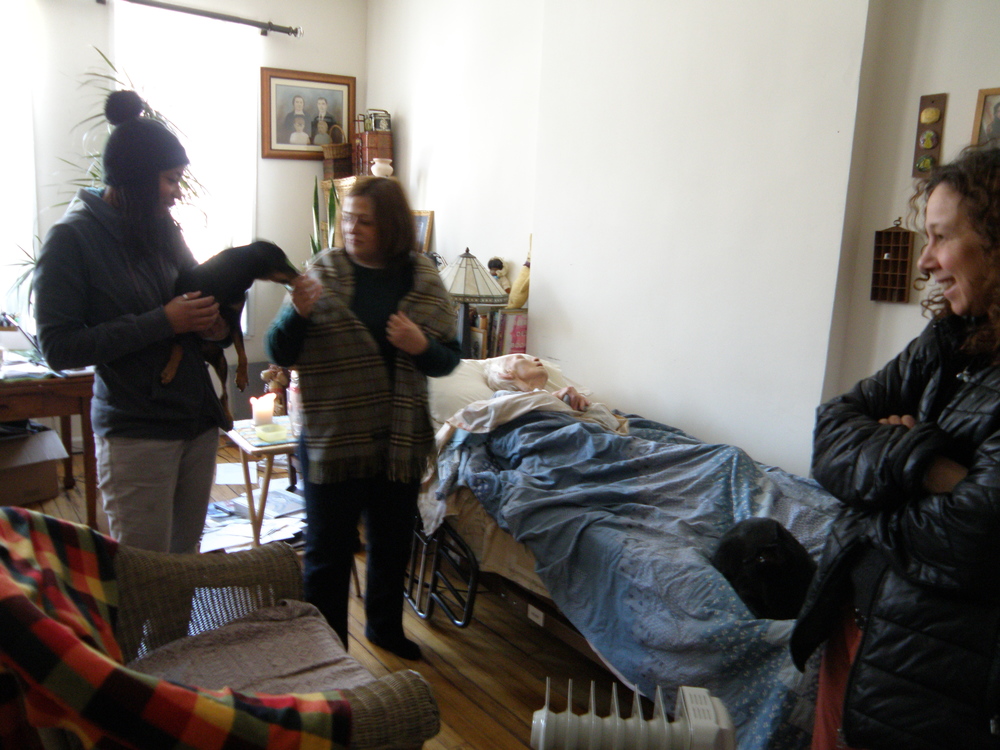 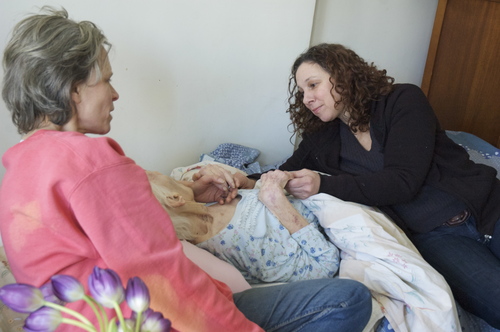 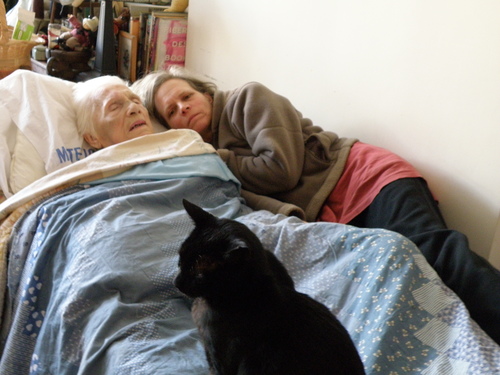 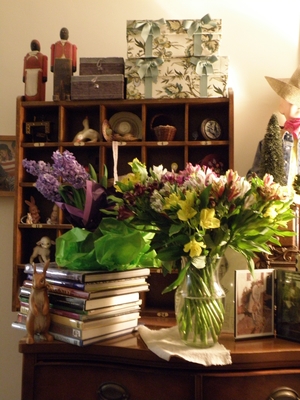 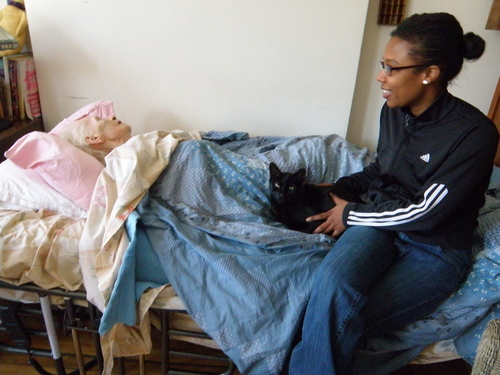 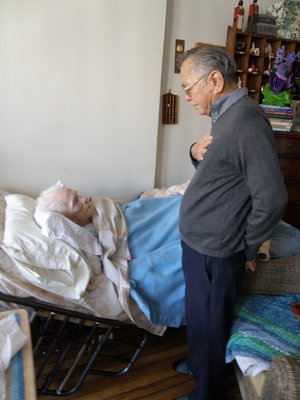 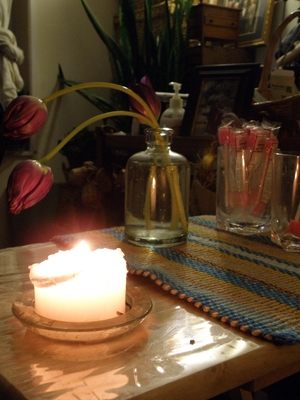 Voices: Mary and Me

Mary died today at 12:30 pm except for that last sigh, which is not really a breath anyway. It went well for Mary and me because we kept strangers to a minimum and friends to a maximum. We were surrounded by friends, who are empathic, smart and creative people. Mary continued to make friends her entire life even up to three weeks ago.

11 days ago Mary stopped eating or drinking. Ice cream was spit out intentionally.

She started having seizures, then diarrhea for a few days followed by upper respiratory problems. Can’t get rid of seizures if you don’t take pills. Maybe she had influenza. Then, she clearly had pneumonia of the right lung so bad that she was uncomfortable unless she was on her left side. Tuesday we decided she was dying, and I agreed to the suggestion of hospice to avoid the paramedics and police disturbing everyone’s peace just to report an expected death. We kept hospice on a short leash. “No. Thank you. We’re good with that.”

I said she was going to die on Friday but she died on Monday after 11 days with no food or fluid.

Mary died with a full house. Nikki, Hans, Geri and I were in the room and Sherry came down from the fourth floor perceiving a disturbance in the force in the house. Yesterday, we took photos of those who gave care to Mary. The day before, Karen came with vegan sushi and talked about missing her mother’s death on hospice in Ohio. The day before that Pat came for the second time and described being fired by Mary every day for 5 years. The day before that Mary Ellen came and we talked about the meaning of closure. The day before that Donna brought symbolic chicken soup into my house and spoke about how decline in health might be a non-medical event. I ate the bagels and I appreciated the chicken soup symbol thing. Michael was in the room as a witness when the hospice nurse came and he can attest that she exited without injury. Michael made me read the bible, and so I did. John, biblical chapter, colon, verse made me cry. Michael gave a minister’s blessing with his left hand on Mary head. His right hand holding Donna’s who in turn held my hand while I was holding Mary’s. It was a circle of Christian, Jew, Atheist, dying person. Like that. The day before that day, George came and concluded that Mary was looking at him, but she wasn't, she was seizing. Lulu came and instructed us where to put the pillow and admonished our technique of applying vaseline to Mary’s lips. The day before that Kerfe came with fragrant hyacinths. The day before that, niece Sarah sent alstroemerias from California and the nurses came from Schervier. Jeanie and Margaret and Maxwell and Clover came. Maxwell made a Caribbean Christian blessing in the manner of real Christians.  The day before that, niece Samantha came for 6 hours and her sister, Christine, the third beloved niece, came after work. In this way, we sat Shiva for the living after I got the idea from Sheryl who is experienced in parental crisis. That same day Mark called and said he doesn't know how to make latkes himself, but we talked about the comfort fried into the latkes that we shared at his mother’s Shiva. Potatoes are comfort food. When we first declared Mary “dying,” Chi brought a candle and told us not to light it until she died but we lit it anyway. We got in big trouble for that, but it seems that we needed to have the fire of life in the room every day.  Everyday Ed sent email: “How are you doing?” I saw visions of Margaret as a spiritual effigy, standing at my left side whispering, “Breathing ok. No morphine needed now,” or “Breathing labored on 2 mg. Ok to double to 4 mg.” Jeanie said, “Any time. Call me.” Kindra wrote an essay called “That's Mary,” as the last person to become Mary’s newest friend. The day before today, Sherry used her camera to capture the emotions of the event that most people want to erase so that we could share and not erase it. All those days went well.

We laughed about terminology like, “Sorry for your loss” and “Gone to a better place” and “Gone home,” and “How is your mother?” Duh, she is dying and she really can’t tell us.

Yesterday we wondered if she was waiting for me to finally finish the unfinished blue quilt that lay on top of her, or for Nikki to get on the plane to leave the country.

Today, the day that Mary died, I went to work. I came home to find Geri at her feet and Nikki and Hans coaching Mary to breathe so she wouldn't die while I was gone. At dawn, while I was at work, Sherry photographed Ann whispering to Mary, “Don’t go.” But Mary had decided to go two weeks ago. Mary died in my arms. Geri was still sleeping at her feet. Nikki, who claims she does not speak Hebrew, spontaneously said Kaddish, which she learned in a previous marriage. We believe Kaddish to be a monotheist male thing, but who cares when you need an ancient language sounding off the walls. While Sherry went off to research the Rastafarian tradition for the dead, I washed Mary with warm water, applied rose scented oil, and wrapped her in an old white sheet from the hospital with her face exposed. It turns out that is what the Rastas do too. Chi came to the house and completed a paper death certificate. She brought more candles, replacing the life candles with death candles for the purpose of lighting her way. Two big strong men carried Mary down from the third floor to the second and out the front door and then down the porch steps. The procession, like a New Orleans funeral, was led by the black panther in residence followed by me, Chi, Nikki and Sherry carrying the "light her way" candles. Mary was properly Judeo-Christian-Buddhist-Rastafarian exited from 85 years of life to packrat-knickknack-scrapbook heaven.

I have three candles burning. With much gratitude to my village. Bye Mary. I miss you so much. 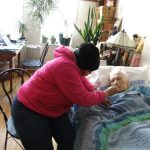 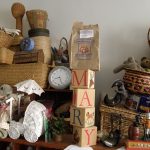 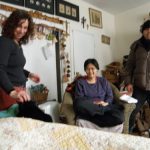 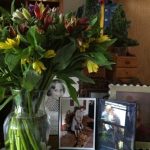 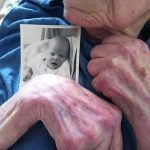 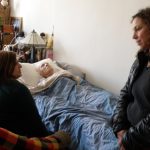 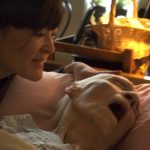 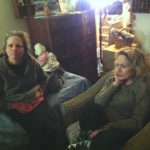 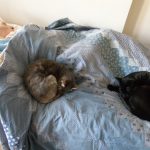 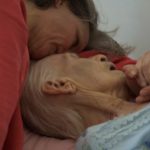