How I Got the Recipe for My Father’s Mushroom Soup

Stories told at My Mother's Recipe

and there is a stereotype that Jewish mothers are amazing cooks with plenty of recipes in their arsenal. Well, I’m here to breakdown that stereotype with two distinctive stories, one about my mother and another about my mother-in-law.

My mother was a self-proclaimed "iron chef," meaning her rock-hard stuffed cabbage could kill a man with a knock on the head. She would prepare food for an army as if the four of us at the table could eat thirty or forty meatballs leaving my poor father to clean the platters and plates with sticky dried out tomato sauce.

The traditional holiday meal for a Jewish family starts out with gefilte fish, chopped liver and hot chicken matzoh ball soup and is followed by roasted chicken and tender brisket before ending with the best deserts my mother’s money can buy. The most infamous family story about my mother's cooking is from a holiday dinner hosting nearly twenty people. As she labored over the oven and stove, the hungry crowd gathered in the dining room with an extended table overflowing into the foyer. This crowd wasn't easy to please, so you figure my mother would put her best foot forward, except for the small problem with the chicken matzoh ball soup. Even for those of you who don't cook, it’s obvious that any soup begins with 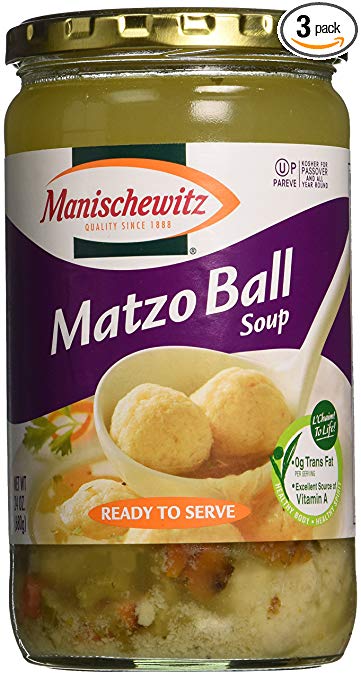 chicken or beef stock broth and chicken matzoh ball soup would clearly use chicken broth of which she did. Her downfall came while serving the soup. As the hungry crowd slurped down the broth people were adding tons of salt and pepper, horseradish and any seasoning on the table because the soup was downright awful, with no taste with an odor that rivaled a sewer because the soup was served in the dish WATER that the matzoh balls were cooked in, rather than the chicken broth. No joke this is how I grew up and its amazing I still have a healthy appetite

and there is a stereotype that Jewish mothers are amazing cooks with plenty of recipes in their arsenal. Well, I’m here to breakdown that stereotype with two distinctive stories, one about my mother and another about my mother-in-law.

My mother in-law Joan is an amazing cook.  I can’t remember a mishap in all the time I’ve chowed down on her special meals which is probably a contributing factor as to why I’ve been married for twenty-four years.

Joan hosted more family dinners and holiday feasts than I can count.  She cooked meals to feed twenty-five for every Jewish holiday, forty for Thanksgiving and sixty for her husband’s birthday bashes.  She also took pride in sharing her meals not only with family and friends, but the needy through soup kitchens and charity gatherings.  It was her goal for everyone to be treated equally, so it was her gift to make sure this happened through food.

Joan grew up first generation American in Brooklyn to a working-class family that could barely make ends meet, but they had a warm meal on the stove every night.  Joan’s mother, Pearl, learned to cook from her mom Rose in Europe. Rose passed along her love for cooking to daughter and granddaughter including sharing the secrets of the "secret sauce."

With a family collection of great recipes, Rose, Pearl and Joan could have started their own "gourmet magazine," but 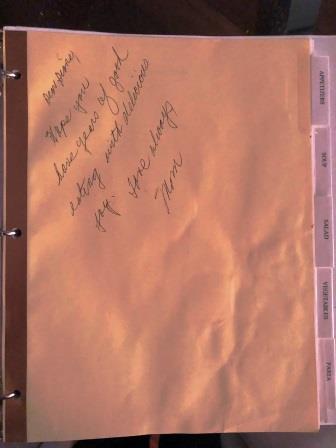 instead, they created a family binder of recipes to hand down to the next generation.  My mother-in-law was very concerned that her four children would never carry on the family meal tradition so she assembled four copies of the family recipes for her four children. My wife’s copy is endorsed:

Overall, the beauty of eating is not only the meal on the plate, but the company of which you break the bread. Like my mother-in-law’s story, may everyone have the opportunity to create something special to pass down from generation to generation.