Grief as it Appears in Email

You mean once they are gone there is nothing I can trade of mine to have her back? Not time? Not travel? Not a silly social life?  Not the lifestyle of eating over the sink?

I am sitting in a "Starbucks" in Montreal with tears streaming down my cheeks.

I have no insight as to why sometimes I miss her deeply, and its totally OK at others. It’s none of the things you identified for yourself, like a possession. It’s not a place, like for Michael, not Sherry's intense photos, and definitely not strangers, like the silly chick from hospice. What hits me are Mary's old friends or the pharmacist at the family-owned shop where they know me. He sounded genuinely empathetic and wanted to tell me how he felt when his very special grandmother died. That's when I feel it, with people who were there with us or those who remind me of who she was to them years ago. The dying thing was intense but so minor and insignificant in thinking about who I lost. That whole process was just an attempt to make a final event. I knew when I left that morning to go to work that it didn't matter if I "made it back in time.” A few minutes in a long life just reminds me of living in the moment and not generating baggage to resolve later.

Oh, is that what you mean by "she will always be with you"?

Thank you for being who you are.

I read this aloud in the car driving back from Connecticut with my sister. We both cried. I only wish I had seen your email as soon as you sent it, so I could have been with you in that Starbucks at that moment. What you said was quite beautiful. You were vulnerable and honest.

I am always flummoxed by the things that shake me back into grief, like the peeling paint on the garden gate, or the small moth hole in her favorite shirt, or the Jimmy Roselli albums that she scolded me not to throw out with the other antiquated vinyl. All of these things were hers, things she loved. They're imbued with her essence, like the people Mary knew, and the people who knew her. The thing is, they are here and she is not, and the times when the grief grabs me unexpectedly are the times when I can't reconcile that fact. It's a shivery moment that stops me dead in my tracks until I can absorb it. Thankfully, as what happens to you, the moment passes, releasing me back into life. And you're right: though different, we all have our triggers. When my father died, I asked a friend if the grief would end. He said, "every once in awhile you'll remember it, you’ll shed a tear, and then you’ll move on, until the next time." He was right, and that's a good thing.

Yes, that is what I meant. I think that is exactly what I meant. In my case, she is so deeply a part of me that her presence is almost palpable.  So that's good. 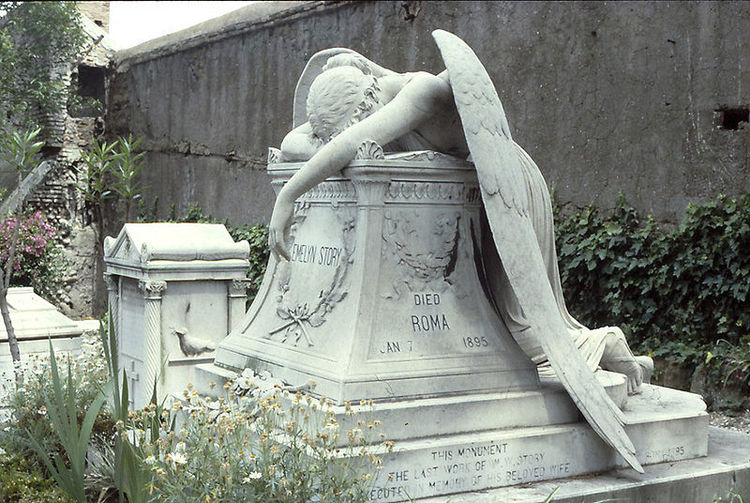 Angel of Grief is an 1894 sculpture by William Wetmore Story which serves as the grave stone of the artist and his wife at the Protestant Cemetery, Rome. Photo by Carptrash 2006

1. having beauty; possessing qualities that give great pleasure or satisfaction to see, hear, think about,etc.; delighting the senses or mind 2. excellent of its kind 3. wonderful; very pleasing or satisfying

1. capable of or susceptible to being wounded or hurt, as by a weapon 2. open to moral attack, criticism, temptation 3. (of a place) open to assault; difficult to defend