Grief As It Appears In Email 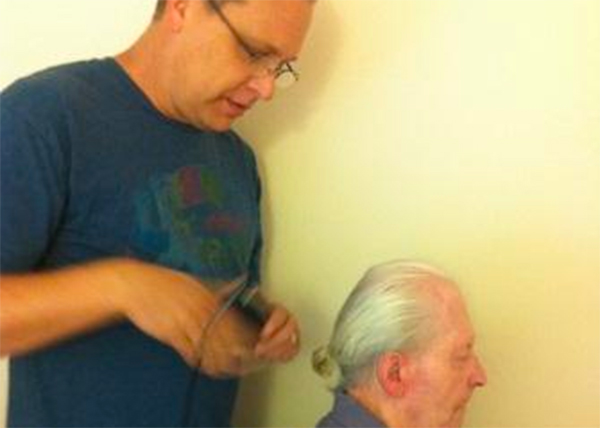 Grooming was relatively optional for Leonard. I was always surprised when he cared about his appearance. Occasionally, he might ask the color of his shirt and if it matched the pants, or if he looked good enough to go to church or a birthday party. I actually thought he used grooming as a bargaining point, but I’m not sure what he was bargaining for besides one last item of control. Occasionally I would remind him that he had three days beard growth. Sometimes I teased him about a soon-to-be pony tail, “a little long in the back.”

Leonard is blind. He cares not for your appearance as long as your conversation is interesting. Leonard is a low maintenance guy who always seemed more interested in personal integrity than surface measures. Integrity, reliability and frugality, these were his unwritten core values. I suspect he refused the $8 nursing home haircuts for more reasons than the exorbitant expense. I suspect that he let his hair grow to almost pony tail length because of something to do with an activity he shared with his son:  a haircut.

I don’t know when, but John started to give Lenny home haircuts with “electric clippers.” Perhaps John took a do-it-yourself course in hair cutting or read the “Hair Cutting for Dummies” book, but for at least 20 years it was something, one of the rare things, they mutually enjoyed doing together. The relationship had little else for father-son bonding.  Not the scores of sports, not the distraction of hobby, not milestone achievement in profession, nor mundane politics were meaningfully shared. But the father and son had the mystical haircut that met both of their criteria for quality time. John giving Lenny a haircut saved money, saved conversation, and accomplished optional grooming while guarding an item of control: “I’m waiting for my son to give me a hair cut." It involved boy tools at a minimum. It was practical.

Even after they lived thousands of miles apart, Leonard would let his pony tail grown “until John gets here,” and John would ritualize mailing the hair clippers across the country so that he could use the tools to share a moment of meaning.  Gone pony tail; nice crew cut.

1. Idolize: This refers to our childhood view of our fathers, when they seem invincible.

2. Discord: This occurs during the rebellious teen years, when we typically want to be nothing like our fathers.

3. Evolving:  During young adulthood, our difference or contempt turns into something more like competition.

4. Acceptance: Occurs during our 30s and 40s when we let go of old hurts and acknowledge our   father’s positive traits. Friendship often begins to evolve in this  stage.

5.  Legacy: In our 50s, we will recognize that we are a living product of our fathers influence.

Of  course, everyone’s experience is not the same and cannot be tied up  into a neat formula. But I believe the search for understanding is  something that is common to all sons, whether you grew up in a  made-for-TV nuclear family or without your father in your life at all.  You want to know about who you are, and part of that includes understanding who your father is.